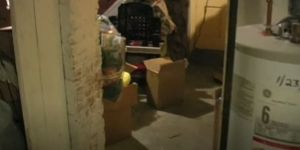 The video starts with a guy going down to his basement, claiming that "some crazy stuff was going on" while he was doing the laundry. He films around his basement for a good two minutes, checking to see if anyone or anything is around. At the 1:42 mark cliché horror music starts playing, until the 1:54 mark, when a cat comes out from behind a wall. The cameraman gets down to get a better view of the cat and starts calling it. Shortly after, at 2 minutes and 2 seconds, the cat lunges at the screen, with red glowing eyes and a loud screech.

I was in the basement doing laundry when I heard some strange growling and then saw a flash run across the room. I quickly ran upstairs to get my camera. After reviewing this footage I saw two images that appear to be a ghost.