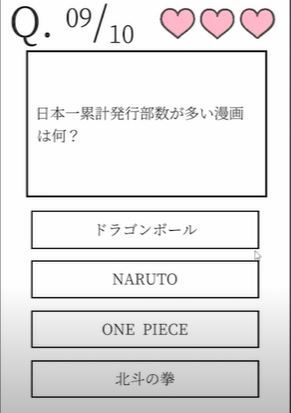 Fun Quiz is a Japanese mobile game created by Nao Yanase. It supposed to be a normal quiz game until the player goes in the Normal Mode, it contains a screamer.

When the player beat the Easy Mode, it will unlocked the Normal mode, this mode is where the odd things starts.

The first three questions can be played normally until the player reach the fourth question.
When the player reach to the fourth question, the question starts with a gibberish question along with the answer, and the answers also can't be clicked. After about 20 seconds, the screen starts to glitching as the gibberish text on the question box is out of the box, as well the answer buttons are everywhere with also gibberish words, along with pretty disturbing sound and the player's phone will vibrate.
When the glitched question ends, it would still on the question screen, but with no questions and
the answer box fills with Japanese words as it fades-in in each answer boxes, and the screen will turns into black filled with random red-colored text. Then later, an illustration of a girl pops up (The illustration was made by Irasutoya).