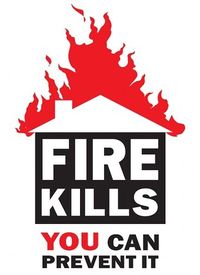 Fire Kills PSA is a public information film of Fire Kills from the UK (circa 2008) which contains a screamer.

The PIF is shot in the style of a home video. It depicts a man sleeping on a couch with a cigarette between his fingers. The camera focuses on the cigar, part of which is sagging and near the point of falling off. As it falls, the video cuts to a flaming skull rushing on screen, with the same scream from all Winterrowd games.

The video fades to the message "Fires started by cigarettes kill someone every four days. Put it Out, Right out." displayed on a black screen. The logo is shown at the end of the PIF.