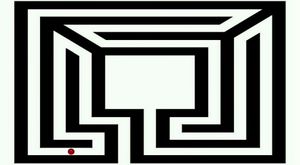 FOLLOW THE RED DOT! SCARY HYPNOSIS GAME ! is a screamer video. It was uploaded to YouTube on March 28, 2016 by user CrazyMarc666.

The video is quite similar to the original Follow the Red Dot, only the maze is a lot sparse. A unique thing about this video is that the screamer appears in the middle of the video. At roughly 27 seconds, a weird creature on a thundercloud backdrop crashes into the camera screaming before cutting back to the maze, where all activity has stopped, there is an alternative version in German exists where the walls of the maze's color are blue, and the face used is a weird looking woman with a scream.