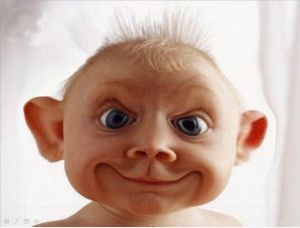 Eso el payaso 1 is a Spanish screamer video uploaded by mrleyva on 14th April 2007. as of October 7th, 2018, the video has gained over 5 million views.

The video's title is described as the spanish name for "It the Clown", referring to Pennywise, who also appears in the video. The title could have been intended as bait, tricking viewers into thinking its about IT mini-series. The video duration is exact 11 seconds, it starts with a slideshow consisting of 3 images, it initially begins with the picture of Sam the Ugly Dog (despite being scary looking and it's not the screamer). after at 5 seconds mark, a picture of Pennywise pops up as the screamer, with what seems to be 2 guys screaming in the background. But at the very end at 10 seconds, a baby with a funny face and voice appears, laughing at the viewer.