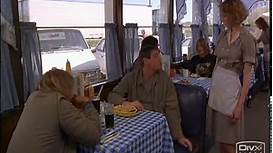 Dumb and Dumber Ghost is one of the earliest YouTube screamers, uploaded by YouTube user Reese Patterson on April 15, 2006.

The video shows a clip from the titular movie. The scene in question is the diner scene. The clip plays normally, until the video asks if the viewer spotted a ghost in that scene. It replays it, stating that the ghost will be circled.

The red circle appears on the van visible from the window. After a few more seconds, a piece of art by Frank Rivera of a screaming man with boiling skin appears with a very loud scream.