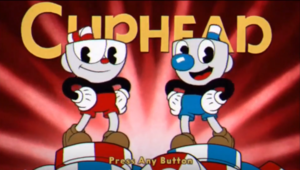 Cuphead is a platformer game released in 2017 for the Xbox One, PC, MacOS and Nintendo Switch. It's often considered one of the most difficult games to come out this decade.

Prior to the games' release on GOG (a DRM free gaming service), some PC gamers pirated the game and were met with an anti-piracy detection, where the game's main theme would be replaced with a rather disturbing track (dubbed by fans as "You paid the price"), a disturbing music would play alongside quiet whispers. Possibly as an attempt to unsettle the pirate for not buying. There are no screamers in the pirated copy, however: In the LEGAL copy of the game, at the end, if you decide to sign the devil's contract, the player's game would end and the main game's theme would be reversed.

In 2018, YouTube user MinecraftMasterDude uploaded a video possibly luring fans and those interested in anti-piracy measures, into believing that upon beating the pirated game, you'd have a reversed-pirated theme much like the legal game. however, it contains a screamer at the end.

In MinecraftMasterDude's video, he has a still picture of the Cuphead menu while the pirated track plays. As implied, the uploader does tag the appropriate lyrics such as "You Stole!". however, after 57 seconds, a yellow and purple tinted picture of the Devil from Cuphead, pops up with an edited version of the Golden Freddy scream from the first Five Nights at Freddy's.

These are infact The laughs of King dice