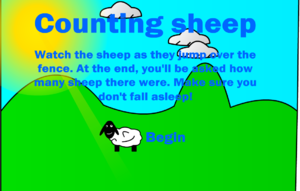 Counting Sheep is a flash screamer animation made by "Dragon" Nelson, originally hosted on dragonsplace.co.uk in 2004.

The game invites the player to count animated cartoon sheep that are jumping over a fence, letting them know they'll be asked how many sheep there were by the time it ends. As the game progresses, the Desert Palace Zone music from Sonic the Hedgehog 3 plays. However, after five sheep jump, a flurry of pictures of injured sheep and sheep carcasses, similar to those that would be found in Offended, appear very fast over an extremely loud roar. The game then cuts abruptly again, this time to a credits frame which has some text reading "LOSER.", "omg you suck", and a "Play again" button.

The site of this game does not exist anymore but can still be found in the archives of web.archive.org.

The title of "loudest screamer in existence" is seriously between this and Disappearing Boat. I wouldn't be surprised if these two are capable of actually damaging your headphones even at volume levels under 50%.

Play the actual SWF itself and you'll see.

Was the game really earrape that raped the headphones