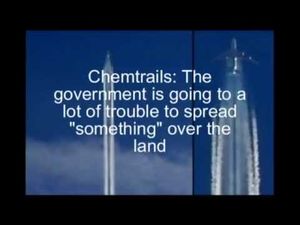 Oh my goodness! What are they putting in the air?

CHEMTRAILS Ingredients Exposed! Science Uncovers NWO / Illuminati Conspiracy is a video made by VaultOfFear to mock supporters of the conspiracy theory that chemtrails exist, as shown in the video's description.

The video starts by telling the viewer:

"On March 17th 2012, a privately funded research team flew a modified Embraer 170 into a chemtrail and collected a large, untainted sample."

After showing some footage of an aircraft leaving contrails, it proceeds to show the rest of the text, over various pictures and videos of contrails, the sky, and scientists.

"Chemtrails: The government is going to a lot of trouble to spread 'something' over the land. Unfortunately, samples taken at ground level were too contaminated by outside factors to be of any use. The government continued, in the false belief that the true makeup of these chemtrails would never be discovered"

"Now, thanks to the high-altitude sample and an advanced form of chromatography, we are able to reveal the constituents of these chemtrails. Some were truly horrific and, frankly, terrifying, but first take a look at some of the less frightening constituents"

At this point, the video starts to list these constituents: Ethyl acetate/Hexane; Diethyl ether/Pentane. Before the third ingredient is visible, however, Pennywise the Clown pops up with an incredibly loud, sped-up scream. After this, the video tells the viewer to share it "with as many conspiracy nuts as possible and spread the fun."