Call of Duty commonly abbreviated for COD is a first-person shooter vide game franchise, published by Activision, and created and developed by Treyarch, Infinity Ward, and Sledgehammer Games, the series has seen games set in the midst of the Cold War, futuristic worlds, and outer space, and more, the game is available on all gaming platforms, In 2008, with the release of Call of Duty: World at War, there was a secret game mode known as "Nazi Zombies" (following WaW, it's known only as zombies) after the player beats the campaign, and has become a staple in the franchise appearing in every single game since Advanced Warfare, In more recent maps, developers have hidden secret screamers on a few of the maps as hidden easter eggs. 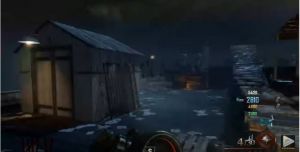 Mob of the Dead.

In the DLC map "Mob of the Dead", the player can come across a hidden screamer. If the player has a sniper rifle and heads to the roof of the prison, where the plane is located, to the very far left, there are fireworks going off. If the player stands at the edge of the roof and zooms in with a sniper rifle, a sudden green face (who appears to resemble the face from ВИD of Doom) along with a high pitched scream will pop up on your screen, This can only happen once and it will only happen to the player who zoomed in, a second, unintentional jumpscare might occur with the maps' boss zombie "Brutus", in Mob of the Dead, every few rounds a boss zombie will spawn to lock down perks for the players, he will always give a hint to when he's arriving, as the player will hear the sound of a cell door closing, with an ominous sound before he suddenly appears, screaming with light omitting him.

if the player is standing close to one of his spawn points, there's a chance Brutus may spawn and scream right in front of the player, possibly startling them. This is more likely to happen while playing solo.

In the 4th DLC map "Origins" there exists another jumpscare easter egg, which is very similar to the one found in "Mob of the Dead"

If the player has a sniper rifle, and heads to the Pack-A-Punch area, and zooms into onto the church (right-hand side of the Pack-A-Punch machine), a damaged skull will suddenly fill your screen and scream. The skull appears to be very damaged and has a reflection in one of the eyes. This screamer can still be accessed on the Call of Duty Black Ops III DLC "Zombies Chronicles" 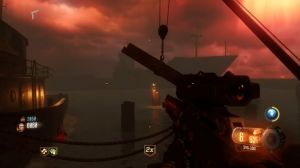 Very much like the "Origins" and "Mob of the Dead" jumpscares, this one requires the player to have a sniper rifle and to be near the boxing gym, Equip the sniper and zoom into the cargo ship, a zombified version of Edward Richtofen (the main character from previous maps) will suddenly pop up in front of your scope and play a loud high pitched scream, In Zetsubou No Shima, there's a screamer that will only occur while playing co-op and randomly too.

Occasionally, the player might see their teammate just standing still, or even scarier, the teammate will be right behind them, and their teammate will look like it's the real player, as they'll be the character they're playing as and their Gamertag will be above them to lure the player into this trap, If the player gets too close to this fake clone, the clone will grab them, a loud noise will play as the clone's eyes and mouth become bright red and scream, before exploding.

Unlike other zombies modes in the franchise, Call of Duty WWII relies rather heavily on jumpscares, with many of them happening in Nazi Zombies, For example, the player might be running through a hallway, only to have a zombie suddenly jump down with a loud scare chord. Unlike previous games, this will happen multiple times, However, in the games' base map "The Final Reich", the player can activate a jumpscare of their own very early on into the game, If the player looks down a manhole near one of the valves, (before they're activated) a zombie will jump up along with a loud scare chord, before he lets go and runs away.

In the fourth installment of the Black Ops saga, Treyarch bought back some screamers in the zombies game mode again.

In one of the games' base maps, "Blood of the Dead", the player can activate a jumpscare of the Shadowman from Black Ops III by doing the following:

Equipping a sniper rifle and heading down the catwalk, however once off the catwalk, near the Swordfish weapon buy, they must aim down the scope and if you look in the right direction, the player's screen will suddenly be filled with a tentacled version of the Shadowman's face up close on the screen, with a loud scream effect. 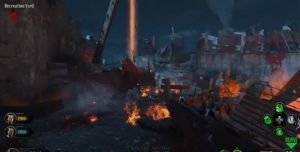 In the Black Ops pass exclusive map "Classified", the player can encounter a parody jumpscare based on the "Last Gen Richtofen" meme. This meme comes from the incredibly low-quality model of character Edward Richtofen from the Xbox 360/PS3 versions of Black Ops III, In order to do this, the player needs a sniper (again) where the player needs to zoom in on a flashing light outside "Groom Lake". This parody screamer uses a sting sound effect from Black Ops 1's campaign mission "U.S.D.D" where protagonist Alex Mason hallucinates about shooting former President John F. Kennedy

In the first DLC map "Dead of the Night" the player can encounter a very unique screamer, For once, this doesn't need a sniper rifle. (Finally!), In the "wine cellar", there is a bright blue glowing crystal on a table, if the player approaches this and interacts with it, they'll begin to teleport, to lure the player into a false sense of security as previous maps used teleportation to get across the maps quickly. However, sometimes when using this NOTHING will happen, other times, a screamer will occur, When teleporting, there is a chance a portrait of a calm young woman appears, however, a few seconds later it will turn demonic and fly at the camera screaming.

The 3rd DLC revisits Nuketown and much like the previous screamer easter eggs, the player needs another sniper rifle, Go to the greenhouse, and go to the balcony on the top floor. Stand near the stairs and scope around in the surrounding desert and look for an A.D.A.M mannequin. A bloody skull with electricity emitting from it will suddenly fill your screen and scream for a second before fading away, A secondary screamer can occur if the player decides to buy Galvaknuckles off the wall and proceeds to punch the heads of every single one of the Mannequins on the map. Once the player has done that, a Mannequin will spawn right next to the Pack-A-Punch machine. If the player punches the head of this mannequin, a sudden jumpscare of a smiling mannequin face will fill the players' screen with a scream. 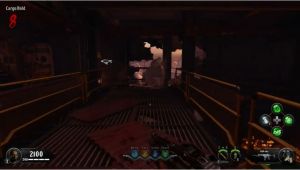 The final DLC of Black Ops 4 houses 2 jumpscares, one of a Margwa from Black Ops 3's Shadows of Evil and one of the Hermit men found in the map.

To find the Margwa jumpscare, the player has to look for a piece of paper around the map located at the Forecastle, the paper the player needs to find says "Margwa isn't real, Margwa can't hurt you", then a picture of a Margwa head screaming will pop up. This one seems to be a reference to the "X isn't real, x can't hurt you" meme, The second one is around the lighthouse, where the Hermit man named Pablo is, he normally cannot be seen outside of a silhouette, at the very top of the lighthouse, and some players really wanted to see what he looked like, and Treyarch knew this so they made him into a jumpscare. If the player tries to see what Pablo looks like, by using a sniper rifle at the lighthouse, if they remain scoped when the light is about o pass their scope, his face will appear instead, screaming.

As a part of the 2020 Halloween update for the free-to-play title Warzone, there was a limited edition mode called Zombie Royale which was added where players could take the role of a zombie upon death and get multiple chances at being revived, Alongside this update, there was a random jumpscare that was added too, in normal WarZone, players can find crates scattered around the map containing weapons, health kits, and upgrades, but during the Halloween event, if the player opened any crate they found, there'd be a chance they'd get an incredibly loud jumpscare while a flashing image of either a portrait, ghost or zombie would pop up for about 3 seconds before disappearing.

This has since been removed following the end of the Halloween event and backlash from the community.

Jumpscares return in the latest installment of the Black Ops saga. 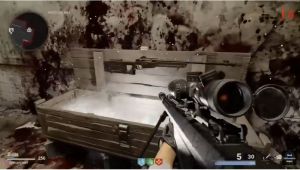 The first map in Cold War houses 2 jumpscares, both featuring an on-fire zombie but the circumstances are different to trigger his appearance, seemingly added in the first update to Cold War, Sometimes when the player hits the Mystery Box, and they're lucky enough to get a RayGun, upon collecting their weapon, an inferno zombie will suddenly jump out the box, scream at the player and attack them (but gives no damage, fortunately). This screamer may also occur in 2 fake-outs, sometimes when the player spins the box they'll get a Ray Gun but as they go to collect their weapon, it's revealed to be a rabbit (the sign they get nothing) and then the inferno zombie jumps out at them. The second fake-out is very similar but without the Ray Gun at all.

The secondary way of triggering this inferno zombie is to do the scorestreak easter egg by shooting floating zombies in the Dark Aether, where on the final step before collecting your weapon if you do not shoot the final zombie in a specific time window, the Inferno Zombie will suddenly jump up and scream like the Mystery Box screamer.