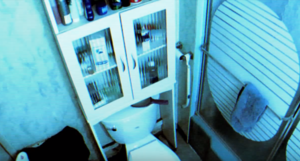 The room the clown pops up in.

CREEPY CLOWN Haunting Caught On Camera! is a screamer video uploaded by ToxicGhostVideos.

The video shows with cameras when have captured such as; the desk, kitchen, the TV and the bathroom. the video have nothing complete with several cuts, when moving the next scene, the video gets distorted, where a ghost throws glasses at the table, the screen began flickering the screen after switching the last scene. however, a man wearing a scary clown mask pops up and fades out.

The video rests, it will have further explains about a clown appearing the screen, then a bottom text reads: "The motion detectors were never tripped by the entity however the cameras provided paranormal activity is amoungst us. I will continue to document these strange events if they continue." the video ends with this outro.