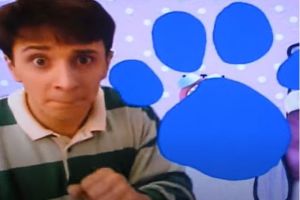 Blues Clues Hidden Message is a screamer video uploaded to YouTube made by TATELAX on July 28, 2008. The video is now unlisted and can be only watched for people who have the link.

The video itself attempts to act like a real Subliminal Messages behind kid's shows, which tricks the user into watching conspiracy theories, the video starts out by the uploader screenrecording his TV screen, showing the main character in the series of Blue Clues, Steve, who is the original host of Blues Clues, singing We are gonna play Blue's Clues!", the uploader didn't show the message, after 6 seconds has passed, will show a picture of a Zombie with fake plastic severed arm, along with a girl scream, the reason of the video was unlisted, the uploader got a lot of negative comments, which came from many people who got tricked thinking there was a message behind kid's shows, the creator decided to unlisted the video to avoid Criticism.