Biggest hockey fight that has ever been in NHL 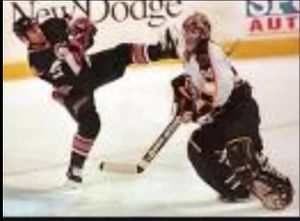 Biggest hockey fight that has ever been in nhl is a screamer publicated on YouTube by the user trigger575707. It begins with a blue background with text reading: this is one of the biggest hockey fights in the nhl. However, after 4 seconds, a picture of a demon child from Dead Birds appears along with a scream, and after the scream ends, a low quality image of two hockey players fighting appears accompanied with some loud distorted music playing.