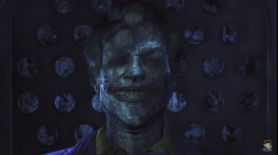 Batman Arkham Knight is a action-adventure game produced by Rocksteady Studios and released worldwide June 23, 2015 by Warner Bros. Interactive Entertainment for PlayStation 4, Xbox One, and Microsoft Windows, series Batman Arkham, there is a creepy easter egg hidden behind this game.

In Batman: Arkham Night, after beating the game on normal or hard difficulty, the player will unlock "New Game+" mode which makes the game much harder.

If the player waits for the background music that plays when the Joker is shown dead in incinerator, once the music ends, after the incinerator is turned on, a few seconds later the loose Joker screen with a great shout in the background, finishing him to laugh, jumping to the final scene of the introduction, but the narration of the Joker, saying "that's what happened, it was so that the Joker is dead!"