Baldi's Basics Trap Out of Control

Baldi's Basics Trap Out of Control is an unofficial sequel to Baldi's Basics in Education and Learning, having the same gameplay as the previous game.

But it's not considered a horror game unlike its official game. Here, when you get the first question wrong, instead of Baldi going after you with a ruler, he is simply killed by someone. Once Baldi murdered, you will be free to pick up all the notebooks in the game, having the same characters that will slow you down when searching for the notebooks, removing the part of being chased by Baldi. The game officially has two endings, one containing a Screamer.

The first ending, you'll have to do like Baldi's Basics in Education and Learning and have to grab all seven notebooks, but without the pressure of being caught by the Bucket staring at you with a loud noise like a dazed scream. After picking up all the notebooks, the school signal will ring and all the characters in the school will come out. You will still have the false exits, but after taking the real exit, you will come across the characters crying, while Baldi's body is taken by an ambulance. After this scene, you take the same bus that took you to school, but it ends up taking you to the cemetery during the day where Baldi was buried. When the player approaches in the coffin, the ghost of Baldi appears, saying goodbye, while the other characters cry and mourn about his murder. This ending at least has no screamer. 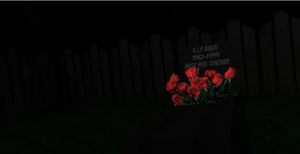 The Alternative Ending, before Baldi comes out.

There are two ways to get this alternate ending. The first one is when the school bus stops. Instead of entering Baldi's school, you should try to go to the playground. You will get into a mini game and will have to follow a correct path without hitting anything, or the minigame will reset. If you enter the school, you will not be able to enter this playground until you collect all notebooks. Instead of taking the bus that will take you to the cemetery during the day, you should approach the playground.

If you pass the minigame, you'll be in front of Baldi's tomb at nighttime. You will hear laughter while the screen goes to the right, showing a mysterious shadow laughing, after which the camera quickly goes to Baldi's grave, where out of nowhere a zombie Baldi will leap at you with a really loud scream.

The second way to do this ending is simply to fail all 7 notebook questions and take the bus. Instead of taking you to the cemetery by day with the school characters, it's just you at night, not having to do that mini-game. This also ends with the zombie Baldi bouncing on you with a loud scream.

Guys, did anyone manage to unzip this game? I'm trying since yesterday to download version 1.2.1, I wanted to test to see if there might be other hidden Screamers, or other means of going to the final screamer, but every time I download the game in. RAR, she says there are no files or is not compatible. I do not say the game, but the file that contains the game that refuses to open, giving a direct error.

Could anyone help such as unzipping the game since .RAR can't unzip?

Seriously, I can not unzip this game in .RAR, despite having many videos with this mod, someone managed to unzip the game, and test?

But the jumpscare.... Holy Old Sport On a Stick.

Finally I got a new PC, much more powerful and 64-bit version. So I gave this game one more chance, downloaded it and, incredibly, finally managed to unzip it. The author who created this version was not concerned, for those using Windows 10 and 32-bit version computers.

its joe joe killed baldi not a mysterious shadow