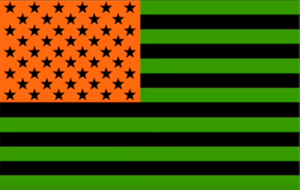 For the record, this actually works.

American Flag optical illusion is a screamer video uploaded to YouTube by user DGlaze91 on May 4, 2007.

The video begins with white text on a blue background, highly typical of YouTube videos during these years, asking viewers to "stare at the picture until the video is over and then look away. " Supposedly, staring at a surface (the text claims a "white surface" would be preferable) will result in seeing the U.S. flag with its real colors. The video then proceeds to show the flag, with different colors: red, white and blue are replaced by their negatives (green, black and orange, respectively). "Bodies" by Drowning Pool plays in the background, 32 seconds into the video, a picture of a goblin mask appears - but there is no scream, making it less scarier. It doesn't even interrupt the music, which keeps playing all the way through to the end.