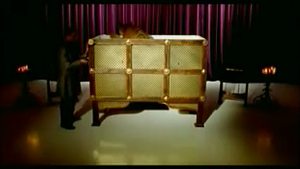 The tiger, before the roof gets locked onto it.

Tigers is the name of a 1996 British PIF (Public Information Film). The ad is from the Enviromental Investigation Agency, an international NGO known as "EIA". It is aimed at informing the audience of the drastic measures the Indian Government takes to protect tigers, their national symbol, from extinction.

The PIF starts with a tiger walking into a magician's box, getting locked inside. The magician in question then proceeds to stab 5 swords one by one into the box, with pained, loud roars being heard after each sword. Blood eventually starts to leak and drip out from the second sword onward. After the fifth sword is pulled in and out, the magician opens the box up in a very sudden movement, with the camera closing up into its completely bloody insides. The ad ends with this message: "Tell the Indian Government you don't want the tiger to disappear", followed by a final red screen with EIA's full name and logo.