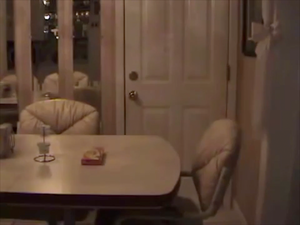 The kitchen where most of the majority of the haunting in the video had taken place.

Demon Caught on Tape is a very rare, supposedly real ghost/demon video that features a bunch of strange things happening at once in a kitchen.

It starts out with a little back story with the narrator claiming they had used a Ouija Board one night and started hearing strange things happening in their cousins house in Florida when they were staying there, which is where this video takes place. They then go on to say that they set up their camera in the kitchen to capture what was making the noises at night, and that the footage is authentic.

It then cuts to a kitchen with the lights going on and off, thud noises, and deep breathing. Then we see other things such as the tables and chairs moving across the room, the door in the shot opening and closing, as well as a black figure going across the screen. Pretty soon the camera starts to shake and then eventually falls over with the same deep breathing being heard as it gets closer to the camera even when it's on the ground.

Then it cuts to the text of the narrator saying that they decided to film again feeling brave as well as the same statement about this footage in the same way as the other footage, saying that it’s authentic.

It then cuts to the same kitchen as before, but this time it's near a hallway and a back room in front of a mirror to capture the appearance of the Ghost/Demon that is haunting them. We hear footsteps, and the same deep breathing, but then very shortly time we hear a plate breaking with a black figure going across the screen, then the footage starts to distort and glitches with color flashes going all over the screen as it shows other parts of the house in a sezuire-invoking moment. Then after it freezes, the camera starts to move on it's own on the tripod and then it goes down, and then up while we hear whispering in the background until eventually it moves to the side showing the dark hallway next to it and then we hear a louder whisper while it shows a white face flashes in the hallway as the camera flashes to white with a transition while we hear an electric razor going off as the video ends abruptly as it in zooms on the dark hallway.