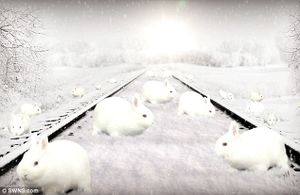 The snow bunnies on the railway track

Count The Snow Bunnies is a Christmas themed commercial from the UK amusement park, Thorpe Park advertising its ghost train attraction, known as Derren Brown's ghost train. It is similar to many counting/searching Flash screamers.

It starts off with the ad asking you to count all of the bunnies in the following scene. The scene then displays a group of snow bunnies playing/frolicking on a snowy railway as Christmas music plays. At 19 seconds in, a grey demonic monster tears through the scene and roars & screams, before slapping the camera away to reveal Derren Brown and the park wishing you a Merry Christmas.

Unsurprisingly, the ad was banned from TV and can only be viewed on their YouTube channel.