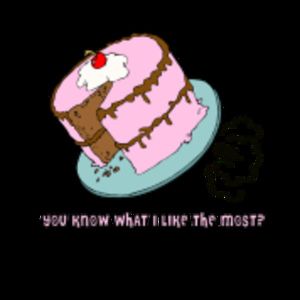 Cake Farts is a shock site from 2008 showing video of a woman farting on a cake in a kitchen. On September 2013, the original site went down.

It first starts out with a square, one-layer chocolate cake, and then it pans to show a woman and then she tells the viewers that she likes to fart on cakes, and that she will need to get comfortable in order to do it. Then she gets naked, gets her hair out of a bun, and then she sits over the cake and then starts to fart numerous times on it before squishing her butt in the cake. Covering her butt with the frosting and the cake batter while still farting and moaning while doing it.

Cakefarts is a video from 2011 in which Chris sits his on a chocolate cake for Jackie's amusement. It was inspired from Cakefarts, and this video implies that Chris is turned on by the shock video.