From Screamer Wiki
< User:Likeicare(Redirected from User:IT/Sandbox)
Jump to: navigation, search 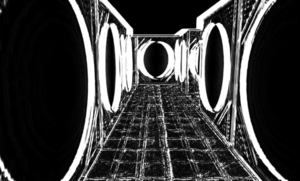 A screenshot of Sad Satan

Sad Satan is a horror game built with the Terror Engine. It was first reported by the channel Obscure Horror Center (also known as Jamie Farrel) on June 25, 2015, in a series of five videos. Due to its dark nature, it was covered by a number of different publications, spawning a subreddit community to discuss the game further. "Sad Satan was also known for its unofficial "true" version. 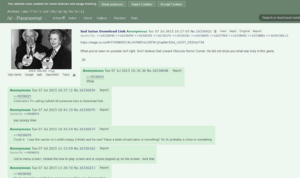 A snapshot of the 4chan thread from a user named ZK, who claimed that OHC has not shown the "true" version of the game.

Following its release, the game was covered by various publications to explain the mystery behind the Sad Satan origin. In particular, the video game blog Kotaku interviewed the owner of Obscure Horror Center, who claimed that he was requested by an anonymous subscriber in a tip to download the Sad Satan game. The subscriber claimed to have found the game in the forum, from a user only known as "ZK."

Following Kotaku's interview, a subreddit r/sadsatan was formed on the site Reddit to further discuss the game's lore and its origin. At some point, Jamie Farrel revealed the .onion address where the game was supposedly found, but users quickly realized that the link contained invalid characters. According to another interview from Kotaku published three days later, Jamie Farrel said that the link was purposely given in error since the game did contain graphic material and didn't want to take responsibility for disseminating such material, although it has been proven that there wasn't any such material included in the game or in the video.

On July 7, 2015, an anonymous user claiming to be ZK posted a thread on 4chan claiming that the "true" version of "Sad Satan" had not been covered by Obscure Horror Center.[1] Below the text snippet is a download link to that version, which included gore and child pornography instead of the images from the original. However, 4chan users who downloaded the game reported that their computers became unresponsive after running this version of the game; it was discovered to have a trojan installed with it. For instance, one user recalled that he attempted to play the game from a USB drive instead of his computer's hard drive, which caused his computer to fail to boot normally.

In both "Sad Satan" games, The player controls their character through the hallway of monochromatic corridors while various audio samples play. These audios include interviews with various murderers and child predators, including the late Jimmy Savile and Charles Manson, as well as musical excerpts like "I Love Beijing Tiananmen." While the player controls their character through the hallway, images will intermittently appear, preventing their progress in the game. Most of these images often include references to child abuse, particularly those of Jimmy Savile and Rolf Harris. A picture of the convicted child rapist and necrophile Tsutomu Miyazaki was among the other images that dealt with crime. Photographs of Lady Justice, the late Cambodian footballer Andrés Escobar, and John F. Kennedy before his assassination are also included.

In the gameplay video for the original Sad Satan the player can be seen moving slowly down the hallway. After some time, a girl can be heard counting from 1 to 10 in German. This audio was produced by a Polish number station called Swedish Rhapsody, which was used to transmit messages in code. At 7:39, the game freezes, and KMFDM's Lynch Mob begins to play over loud white noises and distorted audio. Just before the video ends, a reversed version of Led Zeppelin's "Stairway to Heaven" can be heard, along with the chant "Sad Satan," and a brief glimpse of Jimmy Saville and Margaret Thatcher. A photograph of Franz Joseph's work also appears.

In Part 2, the video features gameplay mostly accompanied by a slowed-down Hitler speech in the background until it silences and the corridor alters into black-and-white. Later, the player sees a child in the hallway, and when passed through it, a loud scream is played in reverse and the video ends there. In some parts, an image of former president John F. Kennedy right before he was shot is briefly shown. In Part 3, Charles Manson's interview can be heard at the beginning, followed by a slightly slowed-down voice saying, "I live where there's no TV, no radio, no electric lights..." The game concludes with a reversed, distorted audio clip of "I Love Beijing Tiananmen" playing while it freezes on the screen.

Before the original Tsutomu Miyazaki appears in the middle of the video in Part 4, an image of him is briefly displayed with his eyes drawn in red. A picture of Lady Justice now appears; this could be a reference to a lack of justice. An image of Rolf Harris, who was found guilty of molesting children, appears halfway through the video. The identical image of Tsutomu Miyazaki appears at the game's conclusion, but his eyes have been written in black, and Led Zeppelin's "Stairway to Heaven" is played backward (like from the end of Part 1). In Part 5, an image of Andres Escobar appears a Cambodian footballer who was murdered after shooting at his own goal. From there, it is followed by the image of Roman Polanski, who was arrested for the rape of then 13-year-old Samantha Geimer. The video ends with the player stranded in the hallway at this point.

In the "true" version, the player was immediately taken into a hallway of monochromatic corridor and the images that displayed were replaced with violent gore and child pornography. G1.jpg featured an image of a child struck over by the truck. G2 and G3 being the image of headless corpses that are related to the case of serial killer Richard Cottingham (also known as "Torso Killer"). G4 is a deformed corpse of a baby. G5 is the image of what appears to be a woman licking a baby's genitalia. Other images included were non-graphic ones also used from the original. Some of these images will display right immediately from the options of title screen. In the end, the player encounters a dead end with a heavily-slowed down song plays, similar to what the original ends. There is an accessible "clone" version with graphic images removed. These are the remaining copies that are easily accessable expect for the one Jamie Farrel covered.