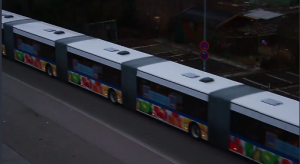 Moments before the screamer.

World's Longest Bus is a screamer video made from an free online editor called Kapwing. The video begins with an extremely (possibly animated) long bus driving down the street, However, after 13 seconds The same screamer from Optical illusions appears on-screen.

There is a variant also uploaded on Kapwing where the face is replaced with a distorted image of Regan MacNeil along with the scream from the original video.

11 days ago
Score 1
can someone semi-protect this page, because ip's keep rolling back this page

3 days ago
Score 0
Fun Fact!: if you edit someone's project in kapwing it will make a copy of it so that nobody's work will be gone changed!