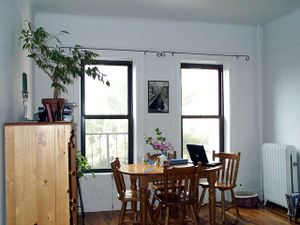 What's wrong with this picture? It's just a dining room!

What's Wrong? is a Flash animation from 2001. The animation starts with a still picture of a dining room. After about 30 seconds, a black and white picture of a woman with large black eyes, a wide open mouth and her hands on her face with her pinky fingers raised, briefly appears accompanied by a male scream. The animation then repeats.

Being Reuploaded on multiple websites like YouTube, this animation has gained many views. The screamer has also been featured on TV shows like America's Funniest Home Videos. screamers of this kind became more and more popular as they began to circulate on the Internet. A few more examples of this are What's wrong with this picture? and Zoeken.

Even though I know it's just a static image staring at it for long enough still makes me feel certain discomfort.