Super Mario 64 Big Star Secret is a partially-found YouTube screamer video based on the "secret" from Super Mario 64. The video was first uploaded to YouTube by Adam "LotusMan17" Bounds on August 15th, 2007, and was then deleted from the channel in late-2012. Aside from being just a Mario screamer, this is a lost screamer that anyone still searches for. Yet, even the people from Lost Media Wiki started hunting for the screamer from websites, which only lasted a year. A poorly-made screamer about unlocking Luigi was enough to provoke a huge amount of search from everyone with informations coming in hand recently. The video had amassed around 900,000 views at its peak.[1]

The video, of course, has to do with unlocking Luigi, and it begins with a handful of steps on how to do so; all of this was impressively made with Windows Movie Maker 2.[1] At first, the steps are shown on a black screen, before Lotus begins doing what the steps say at the beginning. One of the instructions includes running around the courtyard statue[note 1] for a certain amount of time. After the part where Lotus tells the player to kick the Boo, they are then told to press "A" on the wall[2] as being the final step. As the player is about to do so, the K-fee zombie would then appear on the screen, suddenly interrupting the video. However, it is rumored that if one can see far enough, Lotus can be seen going against the wall before the actual screamer, but this rumor has not yet been confirmed. The video shortly ended with the credits appearing from the top. The video used to have three different music, including as for the game-play and the credits, but it was muted due to copyright issues. 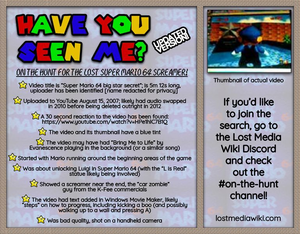 The "Have You Seen Me?" poster made by Lost Media Wiki. The hunt started on September 2020 before it ended in the next year of the same month. Hopefully, the copy will be found in the future.

This one is among the Super Mario 64 screamer videos that appear from its old days, which all had to do with the urban legend. The video was apparently based on "L is real 2046",[3][4] an urban legend that started after it was once believed that a message from the courtyard plaque was a code to unlock Luigi, an unplayable character in Super Mario 64. The video has shown other steps aside from using a code to unlock the character. This urban legend has long since been debunked, kind of.

The video is recorded on the computer screen with a flip-phone, which is believed to be a Motorola RAZR V3.[5] Lotus had made changes on the castle using the editor "Toad’s Tool 64" to place the door in the right wall of the main lobby's staircase and to change Mario's shirt to be blue and overalls to black.[6] Lotus had done other changes besides using the level editor.

The video's audio has been muted to avoid copyright issues, so it was replaced with 009 Sound System's Dreamscape theme in 2010. The video originally had a set of three music, such as "Whispers in the Dark" by Skillet at the start,[7] and "Those Chosen by the Planet" from Final Fantasy VII in the second half and the credits.[8][9] However, the music that played in the beginning was often mistaken[10] as "Bring Me To Life" by Evanescence, according to many witnesses. The video might have been deleted because of the copyright strike in 2012.[11] At some time, Lotus also said that an email was sent to him, which offered him to put "Database" by Alexander Pearls for almost US $40, which he accepted later on. When questioned about the audio swap, Lotus explained that it's "one of the those(sic) YouTube recommends it for audio swaps when they screw you over."[12]

Lotus has confirmed that the screamer took place inside the castle, mostly in the courtyard, rather than the ones claiming to have took place in the Bob-Omb Battlefield. Lotus mentioned that Mario has entered to an "alternate dimension", where textures (from which he drawn in MS Paint) are glitching out, possibly due to low memory issues with the emulator. On September 16, 2020, Lotus made two screenshots[13][14] as a remake such as for the thumbnail (depiction of Mario standing in front of the courtyard statue) and some part featuring Mario next to the castle.

The screamer part appeared to be extended, as confirmed by Lotus himself.[15] 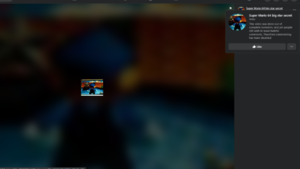 The screenshot of the Facebook page, featuring the updated description and the thumbnail, that is.

On September 8, 2015, a Screamer Wiki user named SCL (also known as Socoollogos on FANDOM) posted his concern about the screamer on a thread in the Screamer Forum. One user also discovered the screamer as SCL was concerned about. He tried finding the screamer through the Wayback Machine, but only to find that no archives of the video had been made yet. The user also mentioned that an annotation popped up during the video, where Lotus said that he would remove the video because he was receiving hate. The reply had a different link to a reaction video, but it was made private.[16] However, there are many posts about this screamer besides this thread. A YouTuber Mahlv also uploaded his concerns about the lost Mario 64 screamer to YouTube on August 2020. Another documentary was then shortly followed at a later date, where he talks about the screamer being hunted by the Lost Media Wiki and other information.

There are no copies of the video that could possibly be found, which is pretty obvious. The only thing that one could find in searching for the update description and its thumbnail. The updated description says, "The video was done out of complete boredom, and yet people still wish to leave hateful comments. Therefore, commenting has been disabled." So this could be the truth behind why Lotus deleted the video: because of how many death threats and hate comments he had received, rather than saying it was accidental. Both the thumbnail and updated description are more likely found through its Facebook page, which was created in late-2011.[17]

There is an only reaction video of this screamer, uploaded on February 5, 2008,[18] featuring someone's brother reacting to the half part of the screamer. It's hard to tell because of the low quality, but one can see Mario climbing up the stairs and opens the door, before the recorder proceeds to skip almost half of the screamer to the end part, where Lotus instructs the viewer to do the final step. After the screamer, the boy then runs away from the computer. Only what's left on the screen are the credits of the video.

A Portuguese user named Nazz uploaded a 5-second video featuring a snapshot of the screamer. The uploader was questioned by a user from Lost Media Wiki about the screamer. He answered that it was found by one of his friends and was supposed to be taken from an old phone. Nazz also recorded his full reaction video to the screamer, but it was never found. The screenshot appears to be Mario jumping into the fountain at the back of the castle, where the courtyard statue is located.[19][20]

Someone should remake it if they cant find it.

6 months ago
Score 0 You
If the OP doesn't have it, it's probably going to be lost forever. I highly doubt that anyone else cared enough to back it up.