A shock site is a form of screamer that uses disturbing imagery, commonly pornography, gore, and graphic content to shock the viewer(s). Just like traditional screamers, shock sites have a goal to shock the viewers with unexpected content. Some good examples of shock sites are 2 Girls 1 Cup, Jarsquatter, 1 Lunatic 1 Ice Pick, and Goatse. These websites have gained a high level of popularity and are often used as a way to prank people. The first shock site ever created was Rotten.com, a website that featured pictures of dead people, disgusting diseases, deformed bodies, and a lot more. In addition, the website was also the first gore site ever created.

In 1996, Rotten.com was registered by Thomas E. Dell (Soylent), after he wrote a program that could guess domains with one word, and "Rotten" was one of the unclaimed words. Rotten.com hosted a gallery of gore videos and images.[1] One file submitted, "motorcyle.jpg", concerned many people and resulted in tons of emails sent to the creator. The file name suggests that it may have been a motorcycle accident, although the website claimed it was likely an "attempted shotgun suicide".[2]

In 2000, Ogrish.com was registered to cover uncensored news and videos. Ogrish.com was best known for its publication of war videos and caused controversy without giving consent from victims' families to upload a video.

LemonParty.org was created on October 3, 2002, and showed a picture of three naked old men having sex while “If You Wanna Be Happy” by Jimmy Soul played in the background.

In 2007, Marco Fiorito directed a video called 2 Girls 1 Cup to MFX Media and gained popularity because of its shock value.[5]

In 2008, Bestgore.com was registered by Mark Merek and received media attention.

In June 2012, Luka Rocco Magnotta posted a video on Bestgore.com of him stabbing and having sex with Jun Lin's corpse. Magnotta posted three videos one year prior of him suffocating his kittens in different ways.[7] One of his videos, titled "1 Boy 2 Kittens", went viral and angered many "cat lovers" who hunted him down. When the "1 Lunatic 1 Icepick" video was uploaded, they pointed out that it was Magnotta.[7]

In 2013, GoreJunkies recieved 4 million unique visitors after its launch.

In 2015, "2 Friends 1 Fish" was hosted under 2friends1fish.com, where it shows a fish receiving oral sex from two people. The Metro said that it had circulated "hundreds of thousands of times."[8] Daily Star also said that it was first uploaded by Facebook user Florin Rada.[9] On the same year, Glory Hole Foundation and its sister site Desk Corporate IT were planned as a prank to a user who was looking for warranted goods.

In April 23rd, 2019, Kekma.ga was released. Kekma.ga, also known under its current URL Kekma.net, is a shock site that once opened displays an 18+ age warning and a giant button that says "ENTER" in the middle. Once clicked, the website will change to extreme gore with a centre video of a man squatting in a pool of semi-clotted blood, forcing a large, bloodstained industrial screw down his urethra. A 41-minute video titled "The Kekma movie" was released on September 11, 2020, and contains several YouTube Poops, various parodies, offensive jokes, and numerous 9/11 statements. The owner of the website, Obok Meatgod, followed up with another site called WomensAlliance.xyz, which shut down a few months later.

In the Family Guy episode Back to the Woods, Brian asks Stewie for help getting unhitched to a pole, but Stewie refuses in retaliation for "making me watch that video with the 2 girls and a cup!" The episode then cuts to Brian filming Stewie sitting on the computer and watching 2 Girls 1 Cup. Stewie then proceeds to become surprised and shocked by the video.[10] 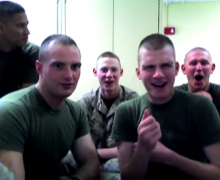 As shock sites made surface on the web, more reaction videos were being posted and eventually became a trend on the Internet. The concept of a reaction video is to get someone to visit a shock site while recording their reaction. A good example of this is the Marines 2 Girls 1 Cup Reactions video, which has accumulated almost 10 million views since it was posted to YouTube in April 2008. In addition, this is the first reaction video ever on YouTube.