Shock sites, also known as shock media or shockers, are any piece of media (mostly on the Internet) that use disturbing content, commonly pornography, gore, and other types of graphic imagery to shock viewers. Just like traditional screamers, shock sites have a goal to shock their viewers with unexpected content. Some famous examples of shock sites include 2 Girls 1 Cup, Jarsquatter, 1 Lunatic 1 Ice Pick, Kekma.net, and Goatse. These websites have gained a high level of popularity since the late 20th century, and are often used as a practical jokes. The first shock website ever created was Rotten.com, a site that featured photographs of dead people, disturbing diseases, deformed bodies, and a lot more. In addition, Rotten.com was also the first gore website ever created. 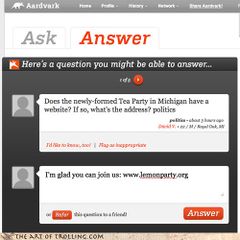 In 1996, Rotten.com was registered by Thomas E. Dell (Soylent) after he wrote a program that could guess domains with one word, and "Rotten" was one of the unclaimed words. Rotten.com hosted a gallery of gore videos and images.[1] One file submitted, titled "motorcyle.jpg", concerned many of the site's users and resulted in tons of e-mails being sent to the creator from viewers. The file name suggests that the injury was a result of a motorcycle accident, although the website claimed it was likely an "attempted shotgun suicide."[2]

In 2000, Ogrish.com was registered to cover uncensored news and videos. Ogrish.com was best known for its publication of war footage and caused controversy by not asking for consent from any victims' families to upload content depicting a victim's death. The company later rebranded as LiveLeak in 2006.[5]

Lemonparty.org was created on October 3, 2002, and showed an image of three naked old men having sex while “If You Wanna Be Happy” by Jimmy Soul played in the background.

Common shock sites (click on the image to view).

2 Girls 1 Cup is the one-minute trailer for the scat pornographic film Hungry Bitches, directed by Marco Fiorito and produced by MFX Media.[8] The trailer for the movie went viral and sparked a heightened popularity of shock sites.

In 2007, the Dnepropetrovsk Maniacs' video of the murder of a 48-year-old man named Sergei Yatzenko was leaked online and was dubbed 3 Guys 1 Hammer by viewers. The teenagers behind the video, Viktor Sayenko, Igor Suprunyuk, and Alexander Hanzha, had killed 20 other people prior to making this video. All three boys were found guilty of murder, and Sayenko and Suprunyuk were sentenced to life in prison, while Hanzha received nine years.[9]

In 2008, Bestgore.com was registered by Mark Merek and received media attention in June 2012 when Luka Rocco Magnotta posted a video of himself stabbing and having sex with 33-year-old Jun Lin's corpse. Magnotta posted three videos one year prior of him suffocating kittens in different ways.[10] One of his videos, titled "1 Boy 2 Kittens", went viral and angered many "cat lovers" who hunted him down. When the "1 Lunatic 1 Icepick" video was uploaded, they pointed out that it was Magnotta.[10]

In late 2014, a video titled 2 Friends 1 Fish was hosted under 2friends1fish.com, which showed two men in a lake forcing a fish onto one of the men's penis'. The Metro claimed in an article that the video had circulated "hundreds of thousands of times."[11] Daily Star also stated that the video was first uploaded onto Facebook by a user named Florin Rada.[12] A year later, Glory Hole Foundation and its sister site Desk Corporate IT were created to prank viewers by convincing them that these sites were run by legitimate organizations.

On April 23rd, 2019, Kekma.ga was released. Kekma.ga was a shock site that once opened displayed an 18+ age warning and a giant button that read "ENTER" in the middle. Once clicked, the website would change to extreme gore, with a center video of a man squatting in a pool of blood, forcing a large, bloodstained industrial screw into his urethra. A 41-minute video titled "The Kekma movie" was released on September 11, 2020, and contains several YouTube Poops, various parodies, offensive jokes, and numerous statements about the September 11 attacks. The owner of the website followed up with another site called WomensAlliance.xyz in October 2020, which shut down a few months later. The site shut down in February 2022, on its final domain Kekma.net.

A viral graphic shock video titled Duckpack51 was uploaded to TikTok by user Mayengg03 in June 2021, who was banned after moderators found his post. The video was named after the Blogspot page where it originated from, and showed a clip of a girl dancing before cutting to a video of a man named Rodolfo Belluci being executed via decapitation. In the same year, a formerly lost "snuff" film made in 2015 titled Necropedopheliac, which is commonly referred to as Snuff R73, was found after a horror cinema iceberg chart mentioning the film was posted onto Reddit. The film is a 10 minutes 55 seconds compilation of extreme medical gore from the Syrian civil war involving children and babies, as well as security footage from China of a man stomping on a toddler. YouTuber Tuv described the video as "The most banned video on the Internet."[13]

Because of their popularity, shock sites have been mentioned or featured in some works of popular media. Lemon Party was mentioned on a sketch on Talkshow with Spike Feresten, Archer, The Simpsons, The Cleveland Show and 30 Rock. 30 Rock made three allusions to "Lemon Party".

In the Family Guy season 6 episode Back to the Woods, Brian asks Stewie for help getting unhitched to a pole, but Stewie refuses in retaliation for making him watch "that video with the two girls and a cup!" The episode then cuts to Brian filming Stewie sitting by the computer and watching 2 Girls 1 Cup. Stewie then proceeds to become surprised and shocked by the video.[14]

As shock sites surfaced on the web, more reaction videos were being posted and eventually became a trend on the Internet. The concept of a reaction video is to get someone to visit a shock site while recording their reaction. A good example of this is the Marines 2 Girls 1 Cup Reactions video, which has accumulated more than 11 million views since it was posted to YouTube in April 2008.