Say It: Difference between revisions 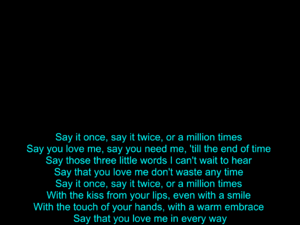 Say It is a simple flash screamer prank from around 2002 made by this unknown maker.

As the name implies, it is about the pop ballad "Say It" by the Kumbia Kings. Once the flash has loaded, it will start playing the song right away, while the lyrics slowly scroll up on a black screen, making it seem like a regular lyrics video.

After at 12 seconds mark, shortly after the line "Say those three little words I can't wait to hear", a picture of Regan MacNeil from the 1973's classic horror movie The Exorcist pops up along with The Same Scream From Toy Story Secrets.

Decompiling the flash reveals that the lyrics featured in this animation include the full refrain and half the lines of the first verse, even though the screamer pops up before the entire text has scrolled up. The excerpt of the song that is included in the file is also about ten seconds longer than what can be heard before the screamer.

The screamer was featured also known as 'Watch This!' on FunnyJunk.

There's a poorly-made version of the flash which is created by joshtheblade exists. The excerpt of the song is longer than the original flash and it uses a different version of Regan's picture which is also used on Nice Relaxing Pictures, an another screamer from the creator of the video with the same scream sound effect used from the K-fee commercials.