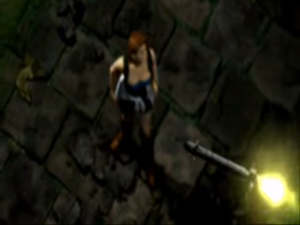 It begins with Spanish text stating an unusual fact, for a subliminal message in Resident Evil, and that its a "little message talked at a minimum image", and that it sounds really low, so the volume should be put up, and claiming that its because "it wasn't well downloaded", and its about to show it so it can be seen well, and then shows the From Relief to Terror cutscene from Resident Evil 3 video game. After it finishes at second 47, another text appears stating that it is not on Jill's voice, and appears saying its gonna be put again, and tells the viewers to listen carefuly, and shows the cutscene again. At minute 1:37, after a missile passes next to Jill Valentine, a picture of a ghost girl holding a doll floating in a hall pops up, and proceeds through four pictures of zombies, while the lyric "Why do they always send the poor?" from the song B.Y.O.B. by System of a Down loudly plays repeating five times (although on the ghost girl picture it plays with the first half silent), and then text appears taunting the viewer saying "Have you seen it now? Hahahaha!", and ends with the uploader's logo.