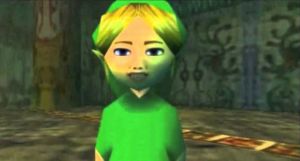 The Link Statue, which can be obtained normally in Majora's Mask is commonly known as "Ben" because of its use in the creepypasta.

Majora is a screamer video that is based on the creepypasta BEN Drowned. The video depicts normal gameplay of The Legend Of Zelda: Ocarina Of Time. That is, until Link encounters the BEN Drowned statue of himself. After staring at it for a nice while, a white face pops up with a shriek before cutting back to the video, where Link apparently dies as he gets set on fire and collapses. A script in the source code will try to fullscreen the webpage in a loop and hide the cursor. The same SWF file that presents the screamer video also tries to open infinite popups.

NOTE: The following website contains malicious scripts that may harm your computer!