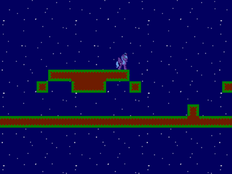 The "Luna Game" series are a series of downloadable games based on My Little Pony: Friendship Is Magic. The creator remains anonymous. Almost every game and related games had screamers.

Screamers In Each Game[edit]

The screamer will vary between two different images and four different musical cues, each happening after 20 seconds of gameplay:

This version has only 1 screamer.

Fluttershy can be heard screaming "COME OUT!" as the player jumps over the pit from the first time only. When the player jumps down the pit, a random image will flash as Fluttershy yells "LOVE ME!" in a distorted way. At the very end, Princess Luna's corpse will come to life and screech at you before the game closes.

The only screamer in this game occurs at the very end. After the game fakes closing after murdering Pinkie, the game will open again with a Pinkie image with crooked teeth. The sound is the same "LOVE ME!" sound bite from Luna Game 3. Text reads "This Isn't Over."

2 months ago
Score 0
I remember watching videos about this on YouTube back in 2012, when I was only just 8 years old.