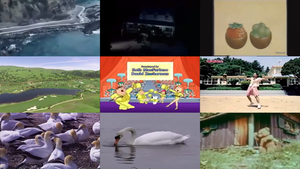 9 re-enactments all at once.

Similar to the original ads, these videos show unrelated clips in the beginning, which are at some point interrupted by either a zombie or a gargoyle, using the footage from the actual K-fee commercials with a green screen or purple screen effect. Clips of the zombie and gargoyle with the green/purple screen are available on Timotunes' channel for those who wish to create their own re-enactments.

Inspired by a similar video about the original commercials, Timotunes also uploaded a When K-fee Commercial Re-enactment Attacked video on November 19 2016, playing the footage of nine of his re-enactments at the same time.

This is the original K-fee commercial re-enactment by Timotunes. It starts with a commercial for Japanese fruit flavored chocolate candy by Meiji. When the filling of the chocolate is shown, the zombie pops up using the footage from the K-fee Car spot.

It was later re-uploaded with English instead of German text at the end, and another time in a version featuring footage from the K-fee Surfing commercial as the screamer.

This features a scene from the 1970's show The Waltons, where their house is shown from the outside at night and the lights are turned off one after another, as the family members wish each other good night. Shortly after the last light is turned off, the zombie from the K-fee Car ad pops up yet again.

There is a re-upload of a “fixed” version, which displays English text instead of German again, but doesn't seem to include any other changes. Another re-upload applies a darker color filter to the zombie, to make it fit better with the night setting.

This uses the music from the original K-fee Car commercial, but features different footage of a black car driving on a windy road along a rocky coast. Eventually, the gargoyle appears using reversed footage from the K-fee Golf spot, meaning that the gargoyle is right-side up this time.

The intro of Seth MacFarlane's animated sitcom Family Guy is shown. Right after the lyrics “Lucky there's a man who positively...”, the zombie from the K-fee Surfing ad pops up.

Dancing with the Girl

This one shows a Korean commercial for fried chicken from the Popeyes fast food chain. It features a dancing Asian girl with cheerful music playing in the background. Later, some chicken puppet is shown watching the girl from afar. The camera then goes back to the girl, and after a couple of seconds, the zombie from the K-fee Meadow ad appears.

A “Better” version of this video was later uploaded, which also includes lyrics to the background song.

Dancing with the Girl 2

This video actually uses the footage from another screamer video, known as Little Dancing Girl or Scary Dance. It depicts a corridor with an old TV showing static in the foreground, while piano music plays. A little Asian girl in a white dress walks into the room, closes the door, and starts doing ballet moves. Then the zombie from the K-fee Car spot shows up.

The video was later re-uploaded as Pretty little Dancing Girl, featuring the zombie from the K-fee Fishing ad instead.

This one features relaxing drone footage of the Cache Creek casino resort golf club. Eventually, it shows a large lake inside a golf course, and after a few more seconds, the gargoyle from the K-fee Boardwalk/Beach 2 spot appears. Yet again, the footage is reversed, putting the gargoyle right-side up.

A commercial for Bärenmarke, a German brand of evaporated milk, is shown. It features a bear puppet who is about to go on a big trip. He is seen leaving a log cabin and locking the door. He then takes a flowered walking stick and starts walking a few steps, until the gargoyle from the K-fee Boardwalk/Beach 2 ad appears again. This time, the footage is not reversed, so the gargoyle stays upside-down.

a Daily life of Swam (sic)

The video shows a swan in a lake, with piano music in the background. The swan can be seen putting its head under water two times. Shortly after it resurfaces for the second time, the zombie from the K-fee Fishing commercial pops up.

This video shows clips of various wild animals, including horses, birds and seals, with guitar music in the background. It then shows an entire flock of birds on the ground, and eventually, the gargoyle from the K-fee Buddha commercial appears.

This shows a video of an overweight man in an office cubicle, possibly recorded by a security camera. The man appears to have technical troubles with his PC, and soon starts to hit his keyboard and shake his computer screen. He then stands up and starts walking away, and soon afterwards, the zombie from the K-fee Yoga commercial pops up.

This one uses the footage from Jeremy Winterrowd's Disappearing Boat screamer, even including the winterrowd.com watermark in the bottom right. This time, however, it uses the zombie from the K-fee Meadow commercial as the jump scare.

This time, footage from the Ghost Caught on Tape screamer is used. Instead of Regan MacNeil, the zombie from K-fee Meadow shows up yet again, but this time with mirrored footage.

The video shows a long-haired man practising yoga, with the background music from the K-fee Buddha ad. He eventually stands up and stretches his hands in the air. Once he starts lowering them again, the gargoyle from the K-fee Golf spot appears, with reversed footage, putting him right-side up.

This one shows a commercial for Gouda cheese by Maeil, a Korean food company. After a while, it shows a close-up of the ad's cartoon family eating the (anthropomorphic) cheese, and the K-fee Car zombie pops up, using mirrored footage.

That all you see

Is violence in movies and sex on TV

Peter: But where are those good old fashioned values

Entire Family: On which we used to rely?

Lucky there's a man who