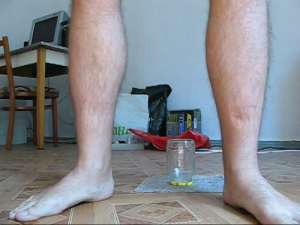 An image was taken moments before disaster.

Jarsquatter, also known as 1 Man 1 Jar, is a shock video made by Alexey Tatarov. The video was released to eFukt on December 4, 2008.

The full video begins with a naked man with two jars on the ground. He then picks one up and shoves the other one away, before putting the one he chose back on the ground (most versions of the video cut out the beginning portion). The man then proceeds to insert it in his anus by sitting on it and forcing it up. The jar then breaks inside his rectum, after which blood pours from his anus. Without flinching or making a sound, he calmly picks pieces of broken glass from his rectum, while a pool of blood gathers on the floor. Throughout this, a rather somber piano piece plays. After removing all the glass pieces, the music falls silent for a while, to which after he stands up, walks away and lets out a scream of pain. A text over the video box says: "If you think you've seen everything...well, just watch this clip."

There is a more widely known version that cuts out the scream at the end (scream which, according to the maker of the video, wasn't from him: it was added by someone else), ending the video abruptly. But the man who made one of his shock videos is Alexey Tatarov.

The day after the video was featured on eFukt, the Golf MKV Forums member danger dan posted a link to the video, describing it as the “most disgusting thing” on the internet. On December 22nd, a reaction video was uploaded by YouTuber mdrproductionz, which accumulated upwards of 135,000 views and 1,100 comments in the following five years.

On August 20th, 2009, a 1Man1Jar site was launched with an autoplaying embed of the original video. On October 8th, 2012, Redditor gravity submitted a post to the /r/vertical subreddit, featuring a vertical four-pane comic using screen captures from the show Lost with captions describing the Jarsquatter video in horror, which received over 600 upvotes.

On February 23rd, 2013, Redditor suthrnpride44 submitted a post to the /r/FiftyFifty subreddit, with its title claiming to be either a screen capture of the Jarsquatter aftermath or a photograph of a duckling. The post, which actually linked to an image of a swimming duck, gained more than 460 upvotes and 10 comments in the next month.

On February 9th, 2009, the shock site Ow! My Ass! published an interview with Alex, which revealed that he was Russian, was twice married with two kids and worked as a sales manager.

From Know Your Meme

4 months ago
Score 1
The scream at the end was not his. The scream was from the editor on efukt.net what was added to tree video.