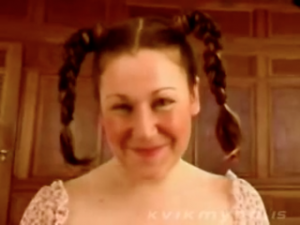 Funny Face is a YouTube video uploaded on July 14th, 2006 made by blkchicago79. It's not known who first made this video or where it came from.

In the video, the video shows a plait-haired woman giggles and smiles at the camera. Then, her face turns green and she starts growling at the camera in the monstrous male voice. After she's done screaming, her face goes back to normal. She then saying: "Whoops, sorry!" while still giggling.

Two versions exists: the one described (the original version), and a later version where her growl sounds less frightening and more like a pirate.

This is cute because she did it on accident, we said whoops