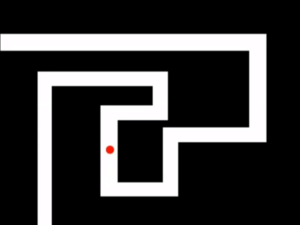 It's like The Maze, but you watch it instead of play it!

Follow the Red Dot is a YouTube video uploaded by RicciAika on March 29th, 2007, the video itself was made in Germany.

The video starts with a text in German: Huthsweg Productions prasentiert Verfolge den roten Punkt! which translates to: "Huthsweg Productions presents Follow the red Dot!" Then, a red dot is shown moving across a white maze, like the title, which tells the player to follow the dot. As it reaches the end of the first maze, another maze comes out and the dot continues to move forward. Just before the dot reaches the end of the section, a close-up picture of Katie Embry from the movie The Ring appears with a loud noise until the end of the video.

There's an alternative version in Spanish which is slightly different, the maze's color, which is light blue, the picture used is Regan MacNeil with a scream.