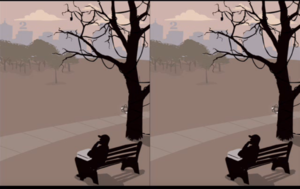 Did you find them?

The video tells you to find 5 differences between two pictures, both of them include a drawing of a man sitting on a bench with something in his lap, wearing a cap, with a tree behind him, with even more trees in the distance. There seems to be a city behind the trees, with the number 2 being on one of the buildings. The pictures have no differences, possibly because the creator wanted the viewer to look at the pictures closely, expecting to find a difference. But during the time mark 19 seconds, a picture of Samara Morgan from The Ring appears with a looped scream.