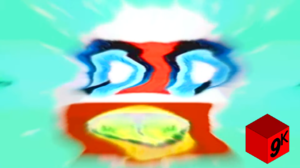 Doomsday Csupo The 2nd Take is a screamer video based on the 1998 Klasky-Csupo logo. Originally uploaded in 2012 as an appearance on "More 9K Outtakes: Recent Batch of Rejects", it has since become popular online, with many parodies and even versions with no screamers. The original version of the video was made by Kyoobur9000 on March 4th, 2012.

It starts off with the logo appearing on the screen, complete with video effects from Sony Vegas/VEGAS Pro (in the specific order): color-inversion, the hue-shift to about 165 degrees, mirroring horizontally, and the "TV Simulator" effect; as well as a demonic tone to the voices and music. At 14 seconds, an edited BND mask logo from the original BND logo zooms in with the scream from other G-Major videos (provided by the author himself). After a few seconds, the screen turns black, and a slowed down G-Major version of an unknown logo jingle plays quietly.

There's an outtakes version which replaces the face with Jeff the Killer having Smile.jpg's grin (Smile.jeff), with the scream from the K-fee commercials.

there is nothing wrong with the video, but the jumpscare... is a bit silly to be honest.

23 days ago
Score 0 You
Klasky Csupo