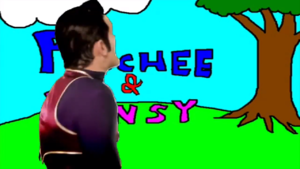 Don't let your kids watch it!

Don't Let Your Kids Watch Poochee and Pansy is a YouTube video that is part of the "Robbie Rotten Hides" meme except like Lazy Town, but takes an unexpected turn at the very end of an screamer happens. This video was made by Wrenchy247.

The video begins with the 2009-2019 Poochee & Pansy intro. Directly after, the meme takes place with Robbie Rotten from LazyTown appearing and covering the video like a shade, saying "Don't let your kids watch it!" Soon, multiple clones of Rotten appear and to this, until the screen goes black. In the last three seconds, the same screamer as the first episode of P&P appears, only it's now tinted red, the image is distorted, and the scream is even more deafeningly loud.