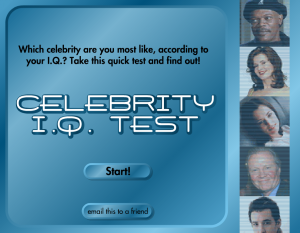 Celebrity I.Q. Test was a Liquid Generation Sabotage screamer. It is unique among sabotage pranks, and most screamers in general, in that it features multiple possible screamer faces, one of which will be chosen at random. The screamer was taken down along with the entire Liquid Generation website.

The game is presented as a regular I.Q. test, which would then compare the player's score to the one of real-life celebrities, to see which one of them would match their intelligence. The title screen features a scrolling slideshow of various celebrities on the right, which would supposedly be among the possible results. The game itself consists of 15 logic-based questions, some of which require keyboard input. The quiz is completely playable with no tricks involved, the screamer does not show up until the player submits their result.

Once the results are submitted, a fake loading bar appears while the game is allegedly calculating the player's score. When it is about 2/3 done, an unflattering close-up photo of one of various celebrities pops up with a high-pitched scream (possible results include Sloth from Goonies, the late Anna Nicole Smith, Evan Marriott from Joe Millionaire, and Carrot Top). Then, a message appears, saying “Your I.Q. is like... (celebrity name) Yes, you really ARE that stupid.” During the usual sabotage jingle with the Liquid Generation cartoon ninja, a small sign at the bottom left tells the player their actual score out of a possible 15.

What are the answers?