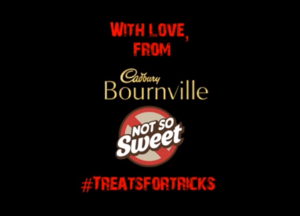 Cadbury Bournville released an online ad in 2013. however, it contains a screamer at the end.

The ad begins with the peacefully showing footage of evening skies as a quiet piano piece plays. Eventually, the ad moves on to a footage of babies giggling and playing with each other. however, after about 26 seconds, a picture of Regan MacNeil from The Exorcist pops up and zooms normally though with the same scream from The Maze, and other screams are mixed. The ad also ends with a message telling the viewer to have a happy Halloween. It was part of the #NotSoSweet campaign.

was this a festival/carnival thing?