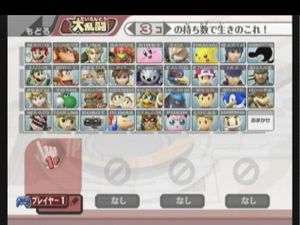 Bomberman in BRAWL!!! High-Quality!! is a screamer YouTube video uploaded by pwnxer on March 13th, 2008.

The video pretends to be a proof that confirms that Bomberman may be a playable fighter on the Nintendo Wii game, Super Smash Bros. Brawl. It starts with text telling the viewer to look closely at the bottom right of the character slots, then shows a fake screenshot of the character selection screen, edited to include Bomberman (it is also noticeable that Wolf isn't on it), while a song from the Death Note anime series plays. At 7 second mark, text showing that gameplay footage will be supposedly shown, but instead, at 11 seconds, the face from What's Wrong? pops up with a low-quality scream, presumably from the video's maker, and text proceeds taunting at the viewer for falling on the screamer, but after, the same screamer pops up again and ends with text crediting the authors of the video.

It is worth noting that the video's thumbnail shows the screamer's face, which makes it quite obvious its a screamer.