Ahenobarbus Henocied is a nickname for an edited image of a Japanese ichimatsu doll with large bloodshot eyes and a bloodied mouth, which is commonly used a screamer image. There were two lines of text on the image, stating "この画像の時間以内に他の掲示板に貼 らないと年末に恐ろしい事が起こります. 画像を貼らず亡くなった人も本当にいます" ("If you don't post it on another bulletin board within the time of this image, horrible things will happen at the end of the year. Some people really died without posting images". The name "Ahenobarbus Henocied" originated from a Facebook account, which included the image as the profile picture of itself. The account had linked to many acts of pure evil, such as seeking out children on social media and bombarding them with horrific images of gore, torture, and other types of graphic content. 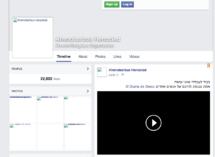 The screenshot of "Ahenobarbus Henocied" Facebook page on July 17, 2015.

Before the picture had its debut in the Japanese internet culture, it was first used as a chain letter that would say "この画像を1時間以内にほかの掲示板に①個貼らないと年末に恐ろしいことがおこります。画像を貼らずに亡くなった人も本当にいます" (If you don't post this image on another imageboard within one hour, something terrible will happen at the end of the year. There are also people who died because they didn't send this picture.). The image is said to have been spreading around since 2005,[1] though there were a few images similar to this that appeared in 2004. There are two theories about this: One explains that the image had appeared on the thread from a Japanese website, and the second one suggests that the image had been shared on the internet after 2005.[2] A user named THEつぶろ contacted a few users about the image of that doll, and all of them replied to seeing it on the bulletin board after that year,[2] proving the second theory might be true in this manner.

Japanese netizens claim that the image began to circulate on the internet in mid-2004 when imageboards such as 2ch started to grow even more after the infamous Neomugi incident happened. However, it was only recognized when a 2ch anonymous user made a thread in 2007 saying "この子すごい怖いんだがお前らの力で何とかかわいくさせてやってくれ" (This dude is scary as fuck so you guys have to somehow use your power to try to make it look cute!), and then the thread started to fill with the same picture but edited and over-shopped to make it look "cuter". The image was also referred to by Japanese netizens as "可愛くさせての画像", meaning "cute image", or "可愛く", meaning "cute". After researching the image, it was found that it was originally a doll with unkempt hair and broken arms, which was found through the logs of Futaba Channel.[2]

The image became such a huge meme in Japan that every time Japanese netizens saw it, they would say またお前かよ (You again?) or い つ も の (The. Same. As. Always.), implying that the picture had become so overused that they didn't want to see it anymore.

The image was also used in a creepypasta for one of the characters in the story. The story was called "Gurgles and Bugman" and featured title characters who unexpectedly broke into people's homes and hid in one of the corners of each room. If the victim approaches them without noticing, a loud laugh can be heard. Once the victim fell asleep, the two would paralyze him. The prank ended with Bugman drinking from the person's neck with a straw, and the show ended with Gurgles covering his face (supposedly the picture) all over the screen with a huge sharp grin while he said, "ssseeee you again ssssoooonn!".

NOTE: The following image is used as a screamer and should not be viewed if desired!