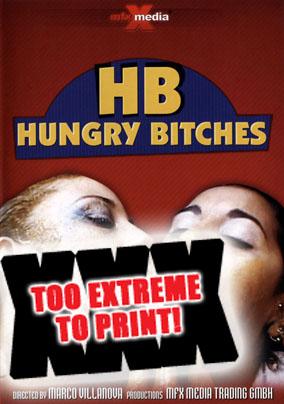 The poster for the full movie, indeed it is too extreme to print...

2 Girls 1 Cup is a shock video. It was a 1-minute trailer created for the 2007 Brazilian pornographic scat film Hungry Bitches, produced by MFX Media.

It shows two lesbian women, Karla and Latifa kissing each other, followed by scenes of them defecating into a cup, eating and licking their feces from the cup and vomiting into each other's mouths.

The song Lover's Theme by Hervé Roy plays through the video (alternatively it was the Rick Astley - Never Gonna Give You Up) The video grew very popular and people started making parodies and reaction videos of it. There are variants of the site that used a script which tried to prevent the user from closing the site by displaying an infinite amount of alert boxes when clicking the close button.

In the Family Guy episode "Back to the Woods" Brian asks Stewie for helping to get unhitched to the pole, Stewie refuses in retaliation for "making me watch that video with the 2 girls and a cup!" followed by a cutaway to Brian filming Stewie sitting the computer and watching the infamous shock video, and then proceeds to become surprised and shocked, nearly the video proceeds.

I was never bothered by this video at all surprisingly, even when I was like 7 when I first heard of it.