1 Bitch 9 Pups, is a series of zoosadistic shock videos made by an unidentified animal molester and killer from McMinns Lagoon, Australia.

1 Bitch 9 Pups was, at first, originally made as a series of 10 short chronological videos recording each animal's deaths. When the videos are combined, they amount to a total of 15 full minutes of animal torture.

Screenshot of the video's preview from GoreDB, before it got taken down.

A few weeks later, a user named Dredderf found the videos from the specific Goreflix thread and saved all the video clips, including two missing clips, and merged the videos into one whole compilation. On March 22nd, when Dredderf finished combining all the video clips, he, under the name of Coolgnomechannel, shared the full video on the gore site GoreDB to spread awareness in hopes of getting the killer doxxed or arrested. The video on GoreDB gained more than 6,500 views.[4] The video was later brought to attention in the same month by online communities (mainly KiwiFarms and numerous NSFW communities on Reddit) due to its horrifically disturbing and inhumane content. The reaction by people who witnessed the videos was overwhelming, and the videos caused trauma and outrage among its viewers; not even users who used graphic imagery could handle the videos' content.

A couple of days after the video was published, GoreDB took it down for violating the site's anti-animal cruelty policy. Despite this, eight video files were still available on their original Goreflix thread post, although they required account creation before viewing the post. Around late June, due to Goreflix changing their policy to prohibit any forum topics about bestiality and zoosadism along with other illegal subjects (such as child pornography and abuse), the original 1 Bitch 9 Pups post was removed. However, some short clips had already spread to other websites including Deadhouse.org.

There is also a video on YouTube with a brief sample from the same footage, where it plays the 1.5-second part of the first pup at first, but the video ends with a Rick Roll as soon as the man raises his hammer. This video was posted on May 10, 2022 and recently gained over 1,400 views.

Fortunately, in April 2022, NT Joint Anti-Child Exploitation Team (JACET) received an email from an unknown investigator (referred to as Mushrooms4 on Reddit)[5] about the video and took action to track down the man behind the video. On April 22nd, two days after starting the search, the NT team and Australian Federal Police (AFP) found the man at his McMinns Lagoon property.[6] After the police uncovered a "significant number" of the man's hardcore animal cruelty videos and photos during a raid of his house, the man was arrested and charged with 15 counts of aggravated animal cruelty and two counts of bestiality under the NT Criminal Code.[7] He remained in custody and appeared in Darwin Local Court on April 26th, although nothing major was revealed about the man in his first trial, as the deeper details about his crimes were suppressed by Judge Alan Woodcock due to their incredibly graphic nature.[8] The man's identity was originally expected to be publicly revealed on his next court trial on June 22nd,[9] but it was reported by some that the trial was delayed to July 13th.[10]

On April 24th after his prosecution, the man's house was burned down by vigilantes from other Australian towns who had traveled to his residence in an attempt to kill him for his actions.[5]

The man, before his arrest, is believed to have killed either 20 or 25 dogs[11] (with 10 of them murdered from 1 Bitch 9 Pups) within the span of several years. 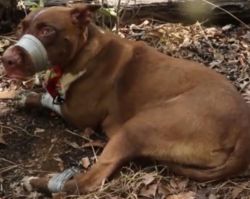 The screenshot of the killer's last victim in her final moments, right before meeting a grim demise.

The video series involve a naked middle-aged man who has brought the adult female boxer/pitbull mix and her nine 2/3-weeks-old pups to the private parts of the Darwin forest with him, along with some set of tools (namely the kitchen knife, a rusty handsaw, and a driller hammer). In all videos, the man was completely silent and his face is never shown on-screen, obscuring his identity. Unlike most footage with graphic content from many shock sites, the series' quality almost had a higher resolution and some of the video clips had few scenes skipping out, implying that some victims' torture likely lasts a lot longer off-camera.

Throughout the video clips, the man mutilates and murders the helpless animals alive one by one to their slow, painful death in several unimaginably heinous ways, however the mother dog shows no reaction when she watched her pups suffering and dying at the hands of the sadist, and besides being forced to eat some of her pups' remains, she licked their serious wounds and exposed innards even while they were still alive; possibly thought she was trying to help her pups.

There are at least 10 videos of gruesome dog killings:

Apparently, 1 Bitch 9 Pups is not the only video series the killer has produced. Several more animal murder videos were discovered on the killer's Telegram account, although none of them were shared outside of Telegram and were all deleted along with the account. Some videos include: