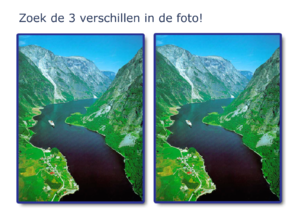 Zoeken, also known as Find the 3 differences between these 2 pictures is a Dutch prank. "Zoeken" is a Dutch word for "search/searching".

This Flash dutch prank disguised between two identical pictures, the game asks the player to find the three differences between two identical pictures of some hills and a river. After a short while, a picture of the character Amy Peterson from the 1985's horror cult classic movie Fright Night suddenly pops up, zooming in and out a few times over a roar, before heading to the end portion with a picture of SpongeBob SquarePants laughing at the screen.