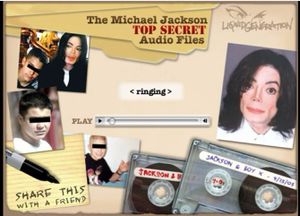 In the game, the player listens to a secret audio tape of Michael Jackson and a boy talking over the phone. Michael is doing taxes while the boy is watching a cartoon. Michael also tells the boy weird sayings like "don't look a gift horse in the mouth and "two in the hand is better than three ??? in a bush or something." At the end, he says "I'm going to take a break from my taxes, do you want to come over and punch me in the butthole?". a picture of Kevin McCallister from the movie Home Alone will pop up with a loud scream. Then a text appears saying "You have been sabotaged" and the word "SABOTAGE" pops up. a ninja falls and says "click here for more sabotages" before a link to LiquidGeneration.com crushes him.