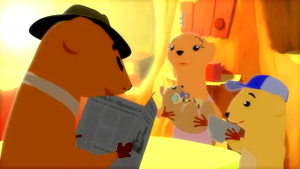 Papa Nerz & die Pelz-Fabrik (Translation: Papa Mink and the fur factory) is an anti-fur trade PSA by PeTA Germany, which was uploaded to their official YouTube channel on March 6, 2012. It is narrated by Thomas D, a member of the popular German hip hop group Die Fantastischen Vier.

The PSA is presented as a lighthearted cartoon about a happy family of minks living in a small forest, with some soothing lullaby music playing in the background. It starts out with the family having breakfast at home, after which Papa Nerz (Papa Mink) gives his son a ride to school like every morning. The teacher asks the kids what they want to be when they grow up. The Nerz family's son immediately raises his hand and says that he wants to work at Herr Nett's (Mr Nice's) fur factory, just like his dad.

It then cuts to Papa Nerz arriving at his job at the fur factory, which he enjoys very much. He sits down in a comfy chair, while his human boss tells him stories which are so funny that they cause Papa Nerz to lose all of his fur because he is laughing so hard. He is then immediately given a bath, a massage and some fur restoring lotion, after which he enjoys a gentle breeze by some air-conditioning fans, slips into his fluffy bathrobe and even receives a bouquet of flowers as a gift from his boss.

Papa Nerz then returns home to his happy family, kisses his wife and goes on to celebrate their wedding anniversary. As the camera zooms away from their home, the narrator exclaims that Papa Nerz's fur is almost completely restored already and everyone is happy. Then the image fades to black, a slashing sound is heard, and a series of real-life photos depicting brutally mangled minks is shown in quick succession with the screech of a cougar. After another fade to black, the narrator then sternly tells the viewer to “stop dreaming and see how things really are” at PeTA's website. A short text at the end also encourages viewers to donate €5 via SMS to stop cruelty to animals.

Dang, PETA! Back at it again with the animal abuse PSAs!

What the heck was that?