The Screamer Forums are back. If you had an account on the old PHPBB forums, you will have to reset your password (Check your spam folder) 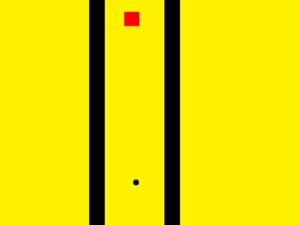 Maze 1 is a screamer application inspired on Jeremy Winterrowd's The Maze. The game contains 3 levels.

When the player launches the game, a blue background appears with yellow-colored text in the middle stating "play". Clicking it makes a large title saying "THE MAZE" show up with its description, which says that the player has to get to the 4th level by moving the black dot with the arrow keys and avoid the walls. After re-clicking the play button, the first level starts.

The game is designed with yellow backgrounds and black lines that count as the "walls". Should the walls be touched, the player will restart the level. The first level requires the player just to move upwards in a straight line to beat it. The second level requires more work, as it needs the player to take multiple turns.

The third level, however, is basically a narrower version of the first level. Upon finishing the third level, a drawing of a zombie with blood splatters, scars, and white eyes appears with a woman's scream from Mortal Kombat. The image will stay on permanently until the application is closed.