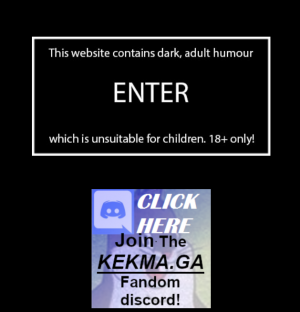 kekma.ga is a bait and switch shock site first hosted on the 23rd of April, 2019. The website purports to be a right wing Reddit clone, especially of The_Donald and Voat.[1] Once opened, the website displays an 18+ age warning and a link to a Discord server. While clicking the Discord link goes to the Discord server, clicking the 18+ warning forces your web browser into fullscreen, triggers several extremely loud distortions of World's Loudest Orgasm, and plays a video of a man squatting in a pool of semi-clotted blood, forcing a large, bloodstained industrial screw down his urethra. Prior to March 13th, 2020, this video was instead a medical recording of pork tapeworm cysts being squeezed from a human liver.

A flag reminiscent of the Kekistani and Nazi war flag was also created around this time and became the de-facto flag for the website; this flag had Big Chungus in the middle, a swastika in the corner, and the text "WE HATE N*****" and "FREE SEX AT KEKMA.GA."

Later posts came in the form of a brigade by TheRomanianAtheist[4], and the first post by this user was made on r/Adulting titled "THE HOTTEST REDDIT ALTERNATIVE"; this user simply posted the link to this shock site multiple times.[5] TheRomanAtheist continued to post about the website on other subreddits calling the website a roleplay site and a webcomic site, but for the most part, TheRomanAtheist roleplayed as a White Nationalist Trump supporter who hated Blacks, Jews, Muslims, Women, Gays, and Liberals.[6]

In March 2020, the website became one of the top trending pages on Know Your Meme.

I made this site. Can't believe how much it has spread. I see someone tried to archive it with wayback. It won't do it because of the robots.txt. If it goes down, I'll post a rar with the whole site here.

What made you decide to create the site and choose the name?
Permalink
You are ignoring the author of this comment
Show comment | Manage ignore list

I've run/created shock sites and screamers every year since 2013. None really of note, just a bunch of .swf screamers that abused a glitch in Flash to turn loud nigra into a cascading howl that sounds like hell. When flash got disabled by default, I made an HTML5 site called Bigimage (it was pretending to be like Imgur). It got maybe 2 wild views a month.

It was just a picture of a fat, middle aged crossdresser sticking his penis in a plastic bottle, while an earraped line from Darkest Dungeon ("ancient traps unsprung and thirsting for blood") played on a loop. Chrome made it so autoplaying elements would not play without being triggered without user interaction, and Firefox followed shortly after.

It was very frustrating. It sounds stupid, but it felt to me like that safe and sterile modern social media dominated internet had finally been spread to browsers, which were now babying people too dumb to install a script blocker. I wanted to create a simple site that would last, that didn't rely on scripts or files that would easily be blocked.

User initiation of what appears to be completely benign scripts and videos isn't something that can really be restricted. That's how kekma.ga was born. It didn't have the fullscreen trap, the severed penis swastika cursor, or the dialogue box delaying closing the site initially, those were added late last year.

The name was suggested by a friend who pointed out that "penisparasit.es" probably wasn't going to draw anyone in, but something related to "maga" could bring in a lot of people from politically oriented communities, who likely were too new to the internet to have seen the heyday of shock sites.
Permalink
You are ignoring the author of this comment
Show comment | Manage ignore list

this ruined my speakers

https://know...emes/kekmaga it has a KYM page now too

I can actually see this trending soon.

You saw right. It's one of the top trending pages on KYM right now.
Permalink
You are ignoring the author of this comment
Show comment | Manage ignore list

Based and redpilled, I spread kekma.ga around our community with friends.