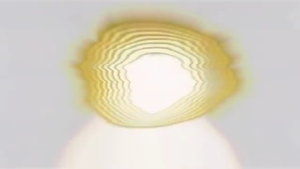 The logo, turned into an unrecognizable mess.

Doomsday Hanna-Barbera is a screamer video based on the 1979 Hanna-Barbera "Swirling Star" logo. The video was made by SuperJohn2005.

The video shows the Hanna-Barbera “Swirling Star” logo from 1979 with the same audio and video effects from Doomsday Csupo. However, 13 seconds into the video, an image of a scary clown mask pops up and zooms in on a red background with a scream, which is also taken from the aforementioned screamer. The screen goes black, and after a few seconds, an unknown logo jingle from Doomsday Csupo plays quietly.

There's an outtake version, which replaces the face with '(Smile.jeff) which is also taken from Kyoobur9000's outtakes, and a scream from the K-fee commercials.