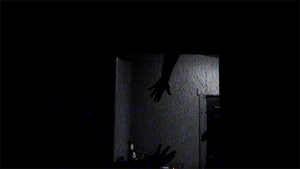 Screenshot from the video.

It has been featured on the Chills channel video, "VIDEOS THAT ARE FREAKING EVERYONE OUT!"

It starts out with a text explaining the story that the narrator used to live in a house with strange occurrences in it, and set up a camera one night back in 2005 to record all of the strange occurrences happening one night. It then cuts to the video, which is of a dark hallway with the room with all of the occurrences happening there the only place that's lit up. Then suddenly a bunch of hands start lurking from around the corner and grabbing the doorway, with some hanging from other parts of the ceiling, and from the other sides too. Eventually you hear some high pitched moaning in the background when 3 heads start poking out from around the corner of the room until eventually one of the demons rises up from the bottom. Filling the entire screen.

The first video ends and then the narrator explains they recorded the strange occurrences again another night. It then cuts to the next footage. We see a white figure go across the screen, with now more hands hanging from the ceiling, along with a bunch of shadow-y figures going all over the screen with more high pitched moaning being heard in the background. Then suddenly the camera becomes detached from the tripod and starts shaking until it eventually falls over into the entrance of the only lit up room. Then we hear more high pitched moaning as the sounds gets closer to the camera and then the demons grab the camera and turn it off, ending the footage. It then closes with the text saying that they had moved out after viewing the footage during that time.